Lesser Chances to get US Visa Approved - New Laws and Regulations 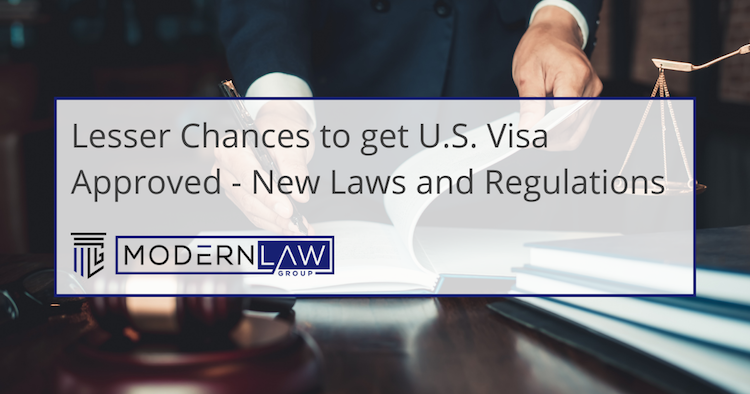 U.S. President Donald Trump’s administration unveiled a new rule in August 2019 that took effect on October 15, 2019. Some experts say the new rule could cut legal immigration in half by rejecting visas and permanent residency to hundreds of thousands of people for being “too poor”.

The 837-page rule targets those who might become public charge in the United States. Visas could be denied to people for not producing necessary income (not making enough money) or who are drawing public benefits in the US.

According to the government's expectations, the status of approximately 382,000 immigrants could immediately be reviewed on those grounds. Immigrant supporters fear the real number could be much higher, particularly if the rule is outspread to the millions of people around the world who apply for U.S. visas at American consulates.

The State Department already changed its foreign affairs handbook in January 2018 to give diplomats broader discretion in determining visa denials on public charge grounds. In the fiscal year that ended last September, the number of visas rejected based on those grounds quadrupled compared to the previous year.

The rule is projected to scare immigrants away from using public benefits to which they are entitled by law. Furthermore, it is estimated that it could get rid of more than half of visa applicants.

The rule is derived from the Immigration Act of 1882, which allows the U.S. government to deny a visa to anyone likely to become a “public charge.”

The public charge grounds of inadmissibility have been part of U.S. immigration law since the late 1800s. Throughout that time, a person has been considered a “public charge,” for immigration reasons, if the person was primarily dependent on the government for maintenance. Under guidance in effect since 1999, a person has been considered “primarily dependent” if they collected federal, state, or local cash assistance for income maintenance or were institutionalized for long-term care at government expense.

The new rule outlines public charge as an immigrant who collects one or more designated public benefits for more than 12 months within any 36-month period. The definition of public benefits is cash aid including Supplemental Security Income, Temporary Assistance for Needy Families, the Supplemental Nutrition Assistance Program (SNAP), most forms of Medicaid, and a variety of public housing programs.

Whether someone is public charge will be decided on a variety of positive and negative factors. A positive factor would be earning 125 percent of the poverty line, which is $12,490 for an individual and $25,750 for a family of four (as of 2019), while earning less would be a negative factor.

Luckily for many, the Court ordered that DHS cannot implement and enforce the final rule on the public charge ground of inadmissibility under section 212(a)(4) of the Immigration and Nationality Act. The court also ordered to postpone the effective date of the final rule until there is final resolution in the cases. Most of the rulings are nationwide, and prevent USCIS from executing the rule anywhere in the United States.