Importance of Retaining an Immigration Attorney 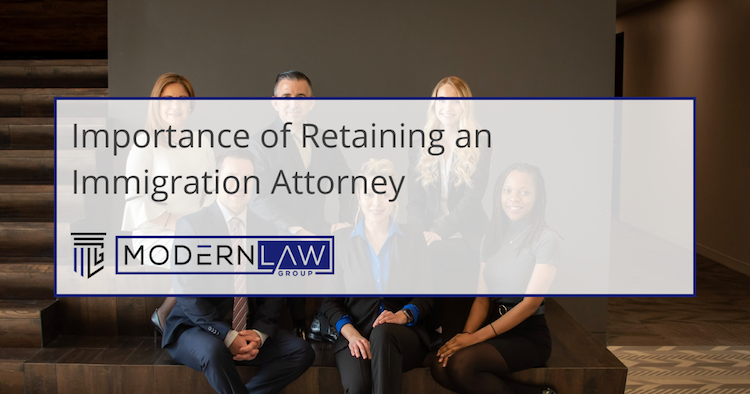 Before you take the first step to start a new journey you need to ask for directions and, in some cases, for help to get you from point A to point B as smoothly as possible. The same is true when you are an immigrant starting a legalization process within the United States.

Many immigrants coming to the United States are not familiar with immigration laws and are seeking advice from friends, relatives, translators, or notaries. They frequently obtain flawed statistics and as a result, face serious difficulties in the future when applying for permanent residence, citizenship, family reunions, etc.

It appears to many that it is enough to fill out a form, attach the necessary copies, and pay the due fees to get any immigration benefits in the U.S. The reality that the person who you are getting immigration advice from (a family member, a friend, a neighbor, etc.), who has been living in the States for many years, speaks proper English, or went through the identical immigration processes, does not indicate that their advice will not harm you in your immigration process. Before you follow unprofessional advice, think about what it may cost you. In many cases, it is worth a consultation with a professional who knows exactly how to help you and will prepare for your upcoming steps necessary to be taken to achieve desirable immigration result.

Of course, not all challenges require an immigration lawyer. You can fill out documents for a work permit, visa, application form for a U.S. passport or a travel document yourself. In the worst case, if you do something wrong, your documents will be returned by mail, your case will be delayed, or they will reject your case and you will lose the fee paid. In some cases, it is not necessary to appoint a lawyer, however it is worth hiring an immigration lawyer to go over the documentation and applications with you to make sure you did not miss anything, before sending the package in. Again, asking for directions before you take your trip is in your best interest.

As a rule, an immigration attorney in the United States is necessary in several instances - to help a person who has decided to extend or change their immigration or non-immigration status; and to represent a person in an American immigration court.

Renewal and change of status are legal procedures, the rules of which are described in relevant US laws and regulations. Since often the need to extend or change the status arises for people who do not speak English well and usually do not have the skills to prepare applications for US state authorities, it is recommended that you contact an immigration lawyer in all cases of renewal or change of status in the United States.

The main problem is the possibility of missing time or a deadline in the event of an error. Often a case with a request for an extension or change of status is submitted by mail, then it waits for a rather long time to queue for consideration, then the application is considered, and the decision is received by the person again by mail. If an error is found in the case at the stage of consideration, the request for a change of status will be refused or no decision will be made at all and the request will be returned to the submitter. You will have to redo the case and again submit his application, in hopes that his time around the submission will be accepted. During this time, the period of permitted stay in the country may end.

Another procedure in which it is strongly recommended to include an immigration attorney is the application for political asylum in the United States. Knowing the essentials of such cases, an immigration lawyer will help write the story in a way as to most vividly emphasize the circumstances of the persecution or fears that most precisely correspond to the strict framework of the grounds for the possible granting of political

asylum in the United States. In addition, the immigration lawyer will prepare a memorandum focused on U.S. case law in which, in addition to explaining the applicable circumstances in the applicant's home country, he will explain the favorable decisions taken previously by U.S. immigration courts in cases similar to those of a person seeking asylum in the United States.

The U.S. Immigration Court is often referred to as deportation court. This name alone clearly indicates how important it is to have a competent and reliable defender, a professional immigration lawyer in such a court.

Very rarely, the status is granted after the interview with the immigration Officer. Unlike the first, people who apply for political asylum in the United States and very often receive a denial and are forwarded to immigration court. The U.S. immigration court holds hearings where the prosecutor speaks against the defendant (the alien). The Law requires for the Alien to have an attorney represent them in the court. It is hard to imagine that an immigration judge in the USA would seriously talk with an alien who did not bother to take care of their defense - although there were cases when a defendant (alien) appeared in an immigration court without an immigration lawyer and had the intention to defend themselves, as a rule, this almost immediately ended with defeat due to ignorance of the particulars of US immigration law and models, as well as the lack of experience in participating in US court hearings. In general, an immigration judge in the USA, most likely, will not even try to understand the case due to previous experiences - the loss of the defendant to an experienced and professional prosecutor. This, by all means, could be reversed had you had a professional immigration lawyer fight for your rights with the prosecutor and win, in most cases.

Thus, the involvement of an immigration attorney in a deportation process in the United States is mandatory.

Of course, an immigration lawyer needs to be contacted as early as possible, at the earliest steps of proposed immigration to the United States.

As the famous saying goes, “Proper preparation is half the success.” It is much easier to assemble the necessary documents, certificates, reports, testimonies, and testimonies while at home than do it from across the ocean.

If you plan to apply for a U.S. immigrant or non-immigrant visa, there is definitely no barrier to working with an American immigration lawyer in properly preparing this application.

In other cases, there are some limitations. Professional ethics prohibits an immigration attorney from teaching someone how to break the law – and coach on pre-planned entry into the United States on a non-immigrant visa with immigration intent. It is a violation of US law.

However, nothing prevents the immigration attorney from telling you how the American immigration law regulates the model of the changed intentions of a person who has already entered the United States, even as a tourist. During his/her stay in the country, a person can, for example, marry a US citizen; or for some reason it will become dangerous for him/her to return to their homeland; finally, a person can become a student of an educational institution, as well as other tentatively possible situations, an immigration lawyer will advise you. He can also tell you what documents would be needed if you are found in such circumstances.

If you are not concerned with immigrant visas, we can say that most often people are interested in the possibility of obtaining political asylum in the United States. If you think that your particular compelling story falls under a certain category and qualifies you for applying for political asylum in the USA, make sure to turn to a trusted American immigration attorney to avoid any serious obstacles you might otherwise meet, which could be life changing for you.