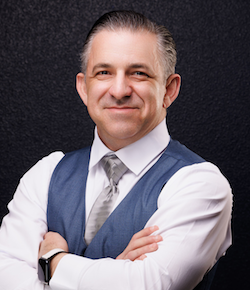 Deron grew up in Northern California and had a strong desire to be a lawyer from a very young age. Even as a child, the idea of helping others, when they needed it the most, had an overwhelming appeal to him. So, after graduating high school, he started his educational journey by getting his Bachelor's Degree in Business from California Polytechnic State University at San Luis Obispo (CalPoly).

Immediately following his undergraduate time at CalPoly, Deron began his studies in the JD/MBA program at Santa Clara University and Oxford University in England. Although he took some time off to participate in the Silicon Valley 'dot-com' boom at the time, he returned to his studies and finished his MBA in 2002.

Not long after, Deron finished his law degree and then moved overseas to run a large business in Eastern Europe. While overseas, he met his wife and embarked upon the legal process of bringing her to the United States. Bringing his wife to the United States through the fiancé visa process was the inspiration behind the creation of the firm. In a sense, Deron was the first client of what is now Modern Law Group.

Since 2009, Deron has led the Modern Law Group team to becoming the top-tier immigration law firm that it is today. Receiving well over 10,000 family-based immigration approvals, with a 99%+ success rate, Deron takes great joy in helping families come together and stay together. He also handles many of the court cases for the firm, helping achieve a 'win' rate far above the national average.

Deron lives with his wife and two children in the suburbs of Dallas Texas.

Schedule a Consultation
Our Services
Meet the Attorney