Claiming Asylum in the USA 2019 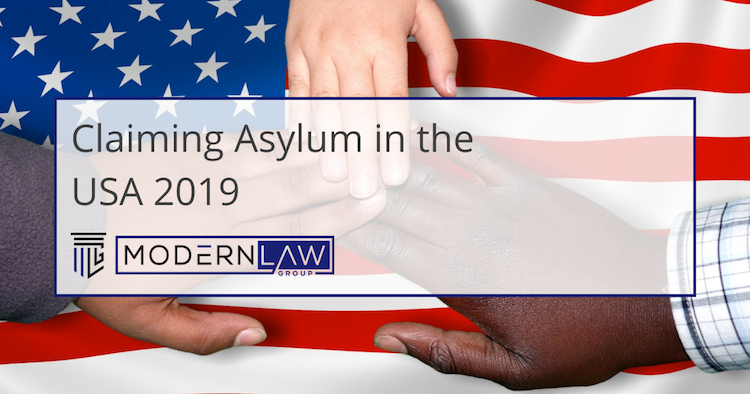 In 2018, the Trump administration pushed to cut down on legal immigration and strengthen the Department of Homeland Security’s ability to enforce immigration laws. Among the changes were U.S. Citizenship and Immigration Services (USCIS) regulations and procedures that affect immigrants who entered legally the United States — particularly on deportations. However, not all of the new rules are punitive. Some help foreign citizens obtain immigration benefits such as green cards or permanent residence.

Each year, immigration benefits are attainable for many law-abiding individuals legitimately seeking greater opportunity, prosperity, and security as newly entrusted members of society. The immigration agency is committed to rule-of-law and merit-based immigration reforms that benefit U.S. workers, the American people, and our society to the greatest extent possible.

However, if you are on your way to the land of the free in hopes to escape persecution from your home country you could ask the US government at the border to “let you in” based on your circumstances which did not give you another option but to escape and ask for protection in the US.

Thousands of people fleeing persecution, most from Central America, line up at the United States’ southern border every day hoping for asylum. They wait for months, their names slowly crawling up a hand-drawn list until they are allowed to present their case to American immigration authorities.

After the United States Supreme Court issued an order in September of 2019, almost none of the people at the border will be eligible for asylum.

The Supreme Court allowed the Trump administration to enforce new rules that bar asylum applications from anyone who has not already been denied asylum in one of the countries they traveled through on their way to the United States.

The rule is among the most stringent measures taken by this administration in its battle to halt migration, upending decades of asylum and humanitarian norms. It is likely to affect hundreds of thousands of migrants traveling through Mexico to reach the United States: Eritreans and Cameroonians fleeing political violence. Nicaraguans and Venezuelans fleeing repression. And the largest group of all: Hondurans, Salvadorans, and Guatemalans escaping the twin scourges of poverty and gangs.

Mexican asylum applicants, who don’t have to transit through another country to reach the United States, are not impacted by the new policy. While the new rules will inhibit most migrants from applying for asylum, other forms of protected status remain open to them, though the bar to entry is much higher.

Under current asylum law, individuals must show a credible fear, which is figured to be a 10 percent chance that they will face persecution if sent back home. The threshold for the two remaining protections now — so-called withholding status and qualification under the convention against torture — is reasonable fear. To qualify, the applicant must show a probability of being persecuted back home that is greater than 50 percent.

This type of asylum also includes cases of people caught at ports of entries or borders who cite that they cannot return to their home countries due to fear of persecution.

Both types of asylum cases have seen spikes in the number of cases filed and the case backlog in recent years.

Our asylum attorney, Deron Edward Smallcomb, has successfully represented many asylum seekers over the years. Our law office can help you to file for asylum and using our legal services will give the typical applicant a far better chance of success with their application.

While there are very reasonable attorney fees associated with the application, there is no government fee to file.

If you would like to learn more about this process, please call our law office so that we can determine your eligibility. If you are qualified, we can discuss the appropriate course of action for your situation. The consultation is free and the information you get might change your life for the positive drastically.

After an affirmative asylum application is filed, an asylum officer is supposed to schedule an interview within 45 days and a decision is expected to be made within 180 days. In practice, those deadlines have been hard to meet.

In January 2018, USCIS changed its policies for dealing with backlogs to prioritize cases in a new order, focusing on the newest cases first (applications submitted within the last three weeks) and working back toward older ones. Since that policy went into effect the number of pending cases has increased less than 5 percent from about 311,000.

Though two other countries — Mexico and China — are consistently responsible for a large proportion of asylum cases in a given year the recent spikes can be attributed largely to four countries: El Salvador, Guatemala, Honduras, and Venezuela.